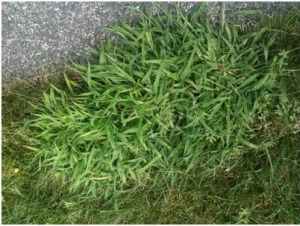 Of course, this is our old friend, crabgrass. When we see crabgrass in a lawn that has been treated with a preventive control, all things being equal, we can usually find a secondary cause for its presence. For instance, in the photograph above the crabgrass is growing adjacent to an asphalt driveway. Why is that significant? Because crabgrass utilizes a form of photosynthesis that is more efficient as the weather gets hotter. As anyone who has made the mistake of walking on an asphalt driveway on a 90-degree day can tell you, they get hot. Really hot. That heat is retained by the asphalt and is dissipated into the surrounding soil. Thus, the area against the driveway has an artificially high soil temperature – which the crabgrass loves.

Crabgrass also will colonize areas that are under stress from disease. A classic example is when a lawn comes down with a case of Necrotic Ring Spot (aren’t plant pathologists clever?) Since the disease causes the death of roots, an area of bare soil will eventually show up, like this:

Granted, that’s a bit hard to see but that’s a crabgrass plant growing in the middle of a diseased area.

In fact, just about any factor that results in the reduction of the turf canopy exposing bare soil to sunlight will eventually lead to that area being infested with crabgrass.

So, you’ve called your friends at Lawn Dawg to let them know that there is a problem with crabgrass in your lawn- for which we thank you for the opportunity to solve the problem – now what should you expect?

We treat the crabgrass with an herbicide that is specific for the control of crabgrass – it is useless against just about every other weed. We will spray the crabgrass using a spot-spray method using a flat fan nozzle so that we cover the plant completely.

You can help us achieve satisfactory control by not watering or mowing for the remainder of the day of application.

After a couple of days, you should begin to see the first signs of control – a necrosis (dead or dying tissue) will begin to become apparent. The bright, highlighter yellow color of the crabgrass will be replaced first by a darker green, with a reddening apparent on the stems. Here is a photograph of those first signs of necrosis:

Crabgrass is a difficult weed to satisfactorily control. The stage of development of the plant, measured by the number of tillers that have emerged, has a great deal to do with it susceptibility to the herbicide. Indeed, a technician can treat two patches of crabgrass right next to one another equally and because one patch emerged before the other, one patch may be controlled completely while the other one shows no sign of control at all. That is why we say that satisfactory control may require multiple re-treatments.

Another issue that we deal with is the cruel fact that even though we have successfully controlled the crabgrass, it does not disappear as would a dandelion. Crabgrass is a very, very tough plant. It has a great deal of lining in its cells that are slow to decompose. When we assess lawns for new customers in the very early spring, we can determine the level of crabgrass infestation in the previous year by observing the number and distribution of crabgrass “skeletons” that remain even after months of winter.

So, what does properly controlled crabgrass look like? I guess it would look like something out of a textbook on turfgrass management written by Stephen King: 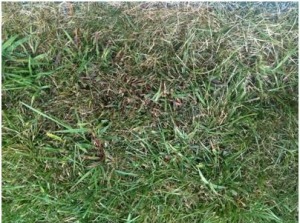 You’ll note the red tinge to the leaves and the lack of vigor. Also, you’ll notice that there are plants surrounding the one controlled that were relatively unaffected by the herbicide.

Research has shown that a properly applied preemergent crabgrass herbicide will control somewhere near 90 percent of the crabgrass seeds that germinate. That’s an important point of order.

The number of seeds of any species of weeds in a lawn is referred to as a seed bank. The balance of the seed bank will vary from lawn to lawn, indeed from one area of a lawn to another.

Let’s say that there are 1,000 crabgrass seeds that will germinate on a lawn that we have applied a preemergent control to in the spring. If properly applied, we will achieve the 90 percent control threshold and we will have 100 crabgrass plants. Now fast forward to the subsequent season. There are now fewer crabgrass seeds in the soil because there were fewer mature plants producing seed. As you can see, each season that you perform crabgrass control, the fewer crabgrass plants there will be in the lawn.

Help kids learn how to differentiate bugs in the yard by learning about the shape of their body, number of legs, and more.